In 2008, the A45 near Northampton was resurfaced using a new asphalt technology designed to prevent reflective cracking – and, a decade later, the road surface is still performing well.

The product used is a high-performance asphalt stress-absorbing membrane interlayer (SAMI), which was developed by Tarmac to tackle the issues associated with concrete roads overlaid with asphalt.

David Markham, head of Asphalt Technology at Tarmac, explains: “There are more than 1,500 miles of concrete roads on our network, many of which have been overlaid with asphalt to provide a quieter, smoother, more skid-resistant surface.

“While they are durable, over time these asphalt surfaces can suffer from reflective cracking, caused by the concrete below, which ultimately leads to the roads failing.” 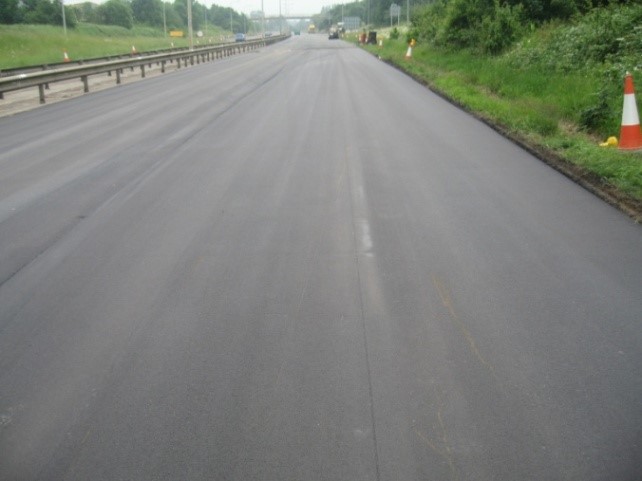 Reflective cracking can be caused by a number of factors, including thermal movement, which occurs as the concrete slabs expand and contract horizontally. This is concentrated at the slab joints and is transferred to the asphalt layer above, causing ‘bottom-up’ cracks to develop in the surface.

Traffic loading can also have a significant effect: as heavy vehicles move across the joint from one slab to the next, vertical movement is created which puts additional stress on the asphalt overlay.

On the A45 site at Billing, the existing asphalt thin surface layer had suffered extensive cracking and been heavily over-banded to keep it serviceable. In 2008 this stretch was resurfaced using Ultilayer SAMI laid 25mm thick directly on top of the jointed concrete, using conventional paving equipment, with 50mm of high performance polymer modified binder thin surfacing on top.

The solution provided enhanced flexibility to accommodate movements in the jointed concrete, protecting the asphalt surface course, which is showing no sign of reflective cracking 10 years after it was laid.

Tarmac has worked with the University of Nottingham to measure its asphalt stress-absorbing membrane interlayer’s (SAMI) resistance to fatigue damage by running long-term studies on both strategic and local roads. The results have demonstrated that when SAMI is used to repair concrete roads the material’s fatigue resistance is over 200 times better than conventional asphalt.

Dr Nick Thom, Assistant Professor in Civil Engineering at Nottingham Transport Engineering Centre (NTEC) and the University of Nottingham, said: “The material that Tarmac has developed has a remarkable resistance to fatigue. As part of an overlay system it presents a very effective barrier to reflective cracking, most especially thermally driven reflective cracking, leading in many cases to a considerable enhancement in road life.”